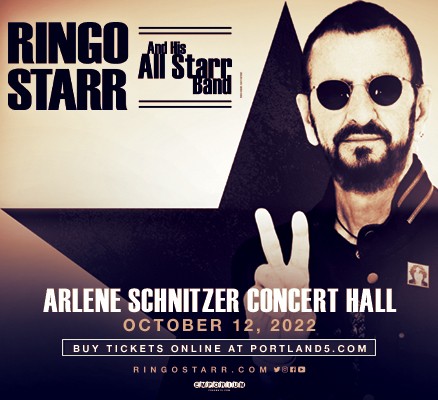 Ringo Starr and His All Starr Band will perform at 8 p.m. Oct. 12 at the Arlene Schnitzer Concert Hall, 1037 S.W. Broadway, Portland. Tickets range from $49.50 to $199.50. VIP packages are also available. Tickets are available at www.portland5.com.

Throughout his career, Ringo Starr has received nine Grammy Awards and has twice been inducted into the Rock and Roll Hall of Fame—first as a Beatle and then as solo artist. Between 1970 and 2020, Ringo released 20 solo studio records and two EPs. He’s acted in over 15 films, received an Academy Award, and been nominated for an Emmy. Ringo has published eight books; had a stint as a male fashion model, and that same year went behind the lens as the photographer for some Foo Fighters PR photos. In 2018, Ringo was knighted and in 2019 he celebrated 30 years of touring with his All Starr Band.